Attendees got an extensive look at the much anticipated upgrade to Membee`s Member Service Center which provides full automation of the processing of inbound new member sign-ups, event sales, and member profile updates.

This is what the user`s group is all about! Organized into tight half hour time slots with sessions running concurrently, Membee users could rotate through 6 different sessions. Each session was lead by a fellow Membee user and provided the details on how to unlock more of Membee`s powerful capabilities. Popular sessions included:

This exercise directly influences the features added to Membee in upcoming enhancements. The group splits up into small teams to identify a single enhancement they would like to see in Membee. Each team then presents their idea to whole group focusing on how the feature would either help members and/or users. The Membee staffers post the feature and its salient points around the room.

From there, each attendee casts their votes for the features they like the best. Membee then takes this information back for inclusion in Membee’s feature planning process. It’s likely not a surprise that 100% of the user group’s top ideas find their way into a future release of Membee. 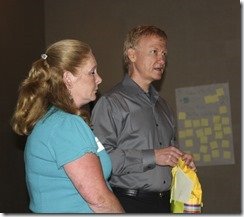 One of the neat things about this users group is that it is 100% self-organized. It is truly is a group “for the users by the users”. Like all volunteer groups, there is always a driving force behind the scenes. This group is no different and that driving force is the group’s chairperson and co-founder, Wendy Brosseau, Operations Manager for the Guelph Chamber of Commerce. 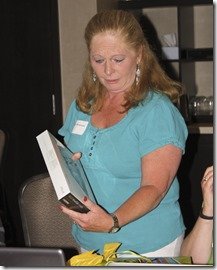 For the past 11 years, Wendy’s dedication to the group, the membership industry, and to Membee itself was unsurpassed and is deeply appreciated by the group’s membership and everyone in the Membee hive. Like all true leaders, Wendy has decided that it is time for someone else to take the reins and move the group in some new directions. Wendy will remain an active member of the group.

On behalf of the group and everyone in the Membee hive, Membee’s CEO, Dale Bennett presented Wendy with a small token (a shiny new Windows 8 tablet) of the group’s deep appreciation for her tireless dedication.

No one cried…. honest.

About the Ontario Membee Users Group 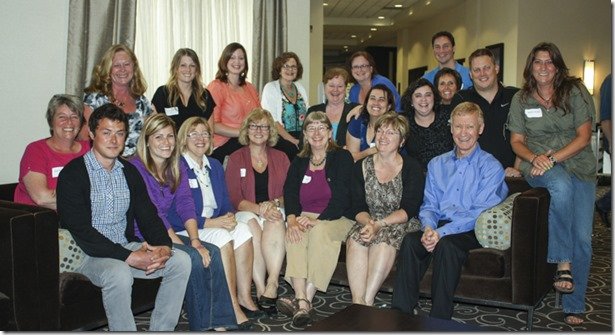 This is Membee’s longest running user group and they are kind enough to invite Membee to their meetings. The group holds a Fall and Spring meeting with each meeting being two full high-paced days of learning, growing, and challenging the status quo.

At the conclusion of this meeting, the group met privately and has appointed a new chairperson. We’ve agreed to let the group commandeer the Latest Buzz blog so stay tuned for some future announcements as the new leadership gets organized.

In addition to being an active user group participant and session leader, Heather Wright, Communication & Project Coordinator at the Guelph Chamber of Commerce also acts as the users group’s photographer extraordinaire. Thanks, Heather!

Receive an email each time we update our blog (no more than 1 per day - usually between 3 - 5 per month).