Since the creation of the first electronic spreadsheet for the PC (VisiCalc) way back in the early eighties, one could easily argue that for certain things, you simply can’t beat a spreadsheet as the best tool for a wide range of data manipulation tasks. A spreadsheet's ability to display data in a meaningful, visual manner …

Since the creation of the first electronic spreadsheet for the PC (VisiCalc) way back in the early eighties, one could easily argue that for certain things, you simply can’t beat a spreadsheet as the best tool for a wide range of data manipulation tasks. A spreadsheet's ability to display data in a meaningful, visual manner while providing the ability to quickly run down a column and update values (either manually or via a formula) has stood the test of time and survived the birth of the Internet, to remain an indispensable tool in the modern office.

Our time-tested pal, the spreadsheet, is a handy sidekick to Membee’s Data Import feature.

Whether you have have a number of potential or new members that need to be added to Membee or a number of records that needed to be updated, Membee’s Data Import is a great tool to have this all done in a batch!

The “Import” feature is found on Membee’s Admin page and it is commonly used to:

Create & Save Import Definitions So You Can Quickly Reuse Them

We’ve outlined above just a few of the ways you can use this  feature. No matter how you use it, a big time saver is the ability to define an Import definition and then save it for reuse later. Maybe you receive data from different sources each with its own set of columns. This allows you to create an unlimited number of Import definitions, one for each of your data sources to accommodate the different layouts of the data. 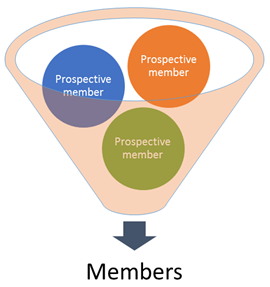 Keep your organization growing by sourcing and importing lists of prospective members. Whether it’s new business in your area, in your industry, or students graduating into your profession, importing lists of prospective members is a cost-effective way to begin the membership marketing process and to source new members that are most likely unaware of what you have to offer.

Once they are in Membee, you can start a “why a membership is a great idea” campaign by using Membee’s powerful communication tools including direct integration with MailChimp and Constant Contact.

Import Updates You Receive From a Parent or Affiliate Organization

If your members are passed to you from the national “home office” or the updates come to your from local and/or regional affiliates, keeping your data up to date used to be a manual process. No more! Map the inbound data fields to Membee’s equivalent fields and let the new Import feature do the work.  You can specify how you want Membee to handle new records that are not found in Membee at the time of the import.

Export Data From Membee, Modify It & Import It Back In 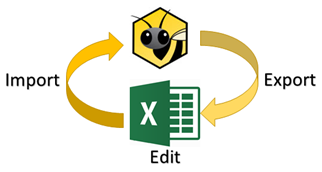 This is a capability that you will use often. Sometimes, it is simply easier and faster to modify your member data in a spreadsheet. As you know, you can export any Membee report and create a data file in the  “CSV” file format that is easily opened in Excel or any modern spreadsheet. Perhaps you want to define the value  of a Membee User Defined Field (UDF) to categorize members (or non-members) in a specific way. All you do is export your member data using one of Membee’s member reports, modify if in a spreadsheet, and import it back into Membee using the Import feature.

Want to learn more? Get the details in Membee’s Help From the Hive Knowledge Base article entitled “Import External Data Into Membee”.  Remember to have your Membee username and password handy to access the article.

Receive an email each time we update our blog (no more than 1 per day - usually between 3 - 5 per month).